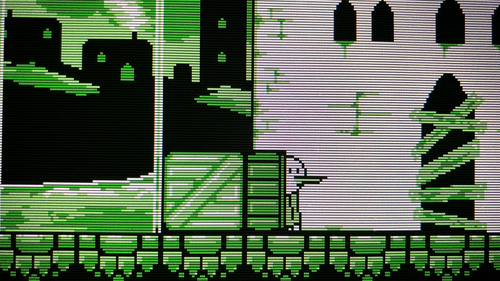 So the demo has been downloaded quite a bit by now - which is really good and makes me really happy. I love seeing peoples let's plays of the demo and their reaction to everything. So far everything has been really, really encouraging, even a few publishers have expressed interest in the project. So that's really good!

I took a bit of a break from Duck Boy after I released the demo ~1 month ago, just to collect feedback and let my thoughts as well as comments collect and simmer.

I'm happy to say that im back on the project and have been pretty hard at work. As far as going back and fixing things people commented on in the demo, I've updated the dialogue system to something a little more polished, and added an NPC in the first room that gives the player alot more direction on where to go and what to do. Still on my list is a better pause menu system.

As far as new stuff I've began to work on the central town hub of the game, "Tida". It's pretty much done at this point, I'm having music done for it this upcoming week, and next I'm going to move onto another major area of the game. Pop on over to my twitter if you haven't already, I've uploaded a few GIFs/pngs there of what ive been working on that people seem to be enjoying. (We even got on dog twitter! shouts out to terrorrose adn everyone else who helped make that happen :) )

Lastly, when i set this page up, I knew i wanted public comments - I'm thinking about shifting this over to the forum style of comments, just to keep things a litte more organized, scrolling through the large list of comments at this point is getting a little cumbersome. I would really like to hear what everyone else thinks though, If this would be a resource worth engaging with. Like i said, when i set this up i knew i wanted comments but I saw the option for ratings and thought to myself "why not i guess", I realize now that I probably should have disabled this for the time being - as it stands Duck Boy only has 2 ratings, one very positive and one pretty negative. I realize it's pretty counter-intuitive to rate a demo, as the final product itself can be and still is subject to major change. At it's best someone dropping a 5-star review serves little more than just a dopamine shot, and at it's worst bad reviews may sully outsider's views on the final game - a static number doesn't articulate exactly what's resonating or isn't for people with the demo.

Progress is moving alot faster than i had anticipated after putting the demo out there. I'm really excited to be working on this and have been trying hard to keep the scope in reasonable expectations. Once i have all 4 areas in the game I'm going to polish like crazy.

Thanks for sticking around and reading my ramblings!

A High-Fantasy Journey Through a Strange And Mysterious Land